John Murphy is a Judge of the High Court, Chairman of the World Bank Sanctions Board and a Judge of Appeal at the United Nations Appeals Tribunal. 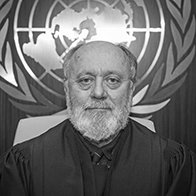 He has also served as a Judge in the Labour Court and was South Africa's first Pension Ombudsman (the Pension Funds Adjudicator) between 1997 and 2003. Prior to that Judge Murphy worked as a labour arbitrator and mediator for the Commission for Conciliation, Mediation and Arbitration and the Independent Mediation Service of South Africa and also as an Associate Professor and Head of the Department of Public Law at the University of the Western Cape. He has served on various statutory bodies, including the Council for Medical Schemes. In 2003-2004 he was the Presiding Judge in the Special Chamber of the Kosovo Supreme Court for Kosovo Trust Related Matters.